K. Bendy here! So, remember a few weeks ago when I showed you my yarn stash, and promised to update  you when I decided which project to start up again? Yeah, me too. The funny thing about trying to get inspired to crochet (or any diy craft) is you go searching around the internet. For me that mostly means Instagram, and Pinterest. Well, both platforms, and the crochet community at large, is OBSESSED with Planned Pooling. The idea that you can get a regularly patterned variegated yarn, find the pattern, and “pool” to arrange the colors in a way that make an amazing argyle pattern. Cool right?!?! Yeah, I thought so too.

I knew I was going out of town this past weekend, so I picked up 2 skeins of Red Heart Icelandic yarn, and decided it would be my project during my down time (of which there ended up being none). Of course I ended up staying up until almost midnight trying to get the ground work for the pattern figured out. All the tutorials say to start with a swatch (which is a small example piece) to figure out the pattern, then you can size it up to whichever dimensions you want.

The first method I tried (can you tell this didn’t go well?) was The Best Crochet Planned Pooling Tutorial by Marly Bird . This method uses a moss stitch (which is one single crochet and one chain, over and over again). I watched the video several times, tried it with my yarn, couldn’t make it look right, ripped it out, tried it again .

First, I made the chain to a color change, then moss stitched my way back across the chain. Then you count how many stitches you get of each color. Based on this, I got 4 of each color. SWEET! I thought, this was going to be a piece of cake. HAHA!

Then you’re supposed to either insert a stitch, or take out a stitch. This makes it so that you’re next row is always one stitch off. Then continue with the pattern, always counting the exact number of colored stitches, until the beautiful pattern appears.

About 6 rows in, and not only does this not look like anything from the video, I’m also fighting with the yarn every color change. Some of the color blocks aren’t long enough for the number of stitches I need and I’m pulling as tight as I can to try to make it fit. I also tried to use a smaller hook size on those sections, but it still didn’t fit AND it made it look weird. So I tried the smaller hook size from the get go. 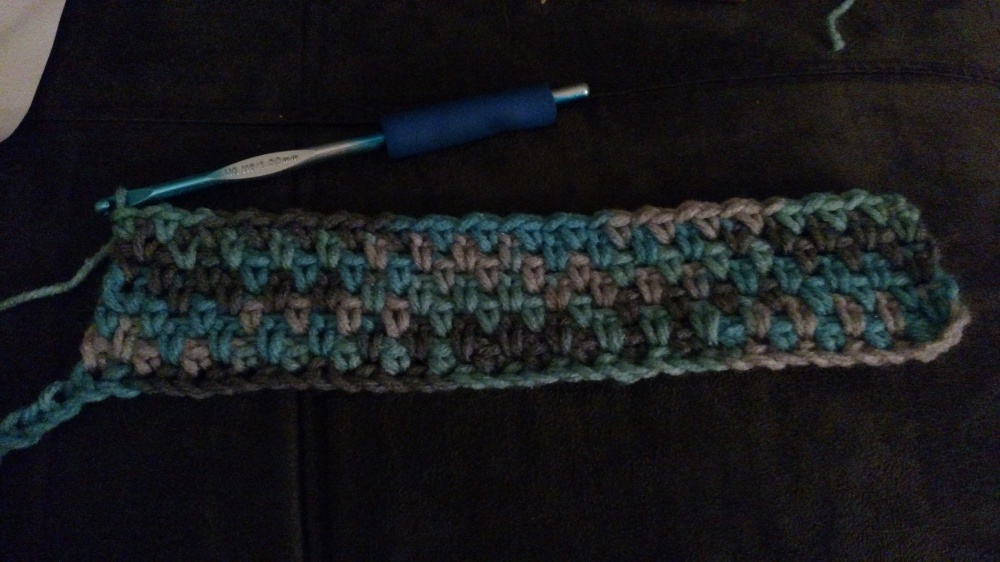 It still isn’t making a pattern, and some of my color blocks were still too short with the new stitch count.
ARG!!!!!!!!
So, I jumped back on Instagram. There HAD to be a way to do this. And if I could find a real person that had done it, then I could ask them.
I found a pattern in the color I had bought, and left a comment. The girl was really sweet and answered back really quickly. She said that she hasn’t heard of many people having success with the moss stitch, and that she had used a different method that was all single crochets. Awesome. So I watched the other video, DIY Tutorial – How to Crochet Color Planned Pooling Argyle for Super Scarf & Afghan Blanket by Naztazia. Simple enough. It also utilizes the website http://www.plannedpooling.com which you put in how many colors, and how many stitches. Then, it takes the guess work out of the pattern, but you can add/remove rows to make the pattern you want! I picked this pattern, and set to work.

But once again, I started having issues, almost immediately, with the length of the color blocks. I ended up having to decrease the number of stitches because I was again having the issue of yanking on the yarn to complete the color block. I changed it from 6/8/6/6 to the 5/7/5/5 above, but THEN I was getting a few that were too long, and having to add in half double crochets, that looked like weird knots in the middle of the row. Looking at this picture now, I can’t see them as well, but I KNOW THEY ARE THERE!

I followed the pattern above exactly. Even stopping each row to make sure I was on the right count for the color change, and this is what I got.

It looks ALMOST right … but not quite. I felt like the single crochets were getting blocked on the “wrong side” and therefore the pattern of the colors is only half there every other row. It’s like if you took the computer grid above, and shrunk every other line in half.
With this in mind, I decided that I would try double crochets instead. This way I get a taller stitch to show the color, and I’ll be able to see both sides. I made up a new grid with my starting chain and counts.

I apologize for changing the pattern around. It’s still in the same order, this one just started with the dark grey instead of the light grey. This pattern was a little more stretched top to bottom than I would have liked, but at this point, I just wanted it to work! So, I started the double crochet version and loved that I wasn’t fighting with the yarn anymore. It was easier to give and take with the larger stitch, and after a few rows I started to see the pattern. 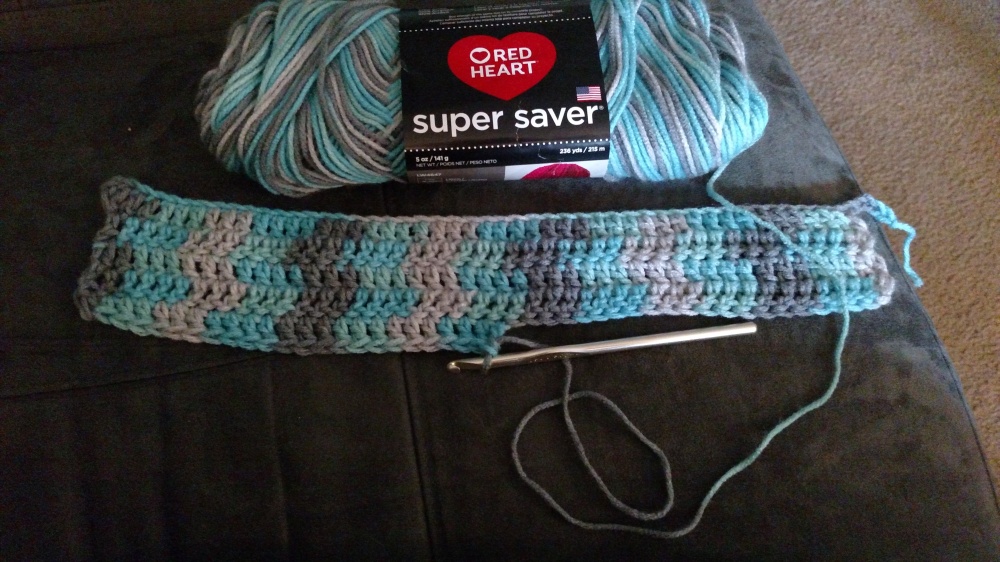 I had to set the project down while left the house. When I came back I planned on continuing. I checked my pattern from the website to make sure I was on the right track, and LOOKED AT THE WRONG VERSION. So like a normal person I   freaked out and PULLED THE WHOLE THING OUT 😦 Rookie move.

I realized my mistake, but I liked the “wrong version” better anyway. This also gave me the opportunity to redo the chain, and the first row since I accidentally had too many dark grey on the very first color block. A few hours later and ……

HOLY MOLY, PLANNED POOLING SUCCESS!! It’s definitely not as pretty as some of the tighter work in single crochet or moss stitch, but it went by so quickly, and more importantly, so smoothly. I hardly ever had to add an extra bulky stitch just to get my counts right. They just DID. I’m actually thinking about making it into a full sized couch throw.

This is a tick in the WIN column for me! /Que happy dance music. Stay tuned to find out if I ever pick up the other 3 projects waiting in my yarn stash.